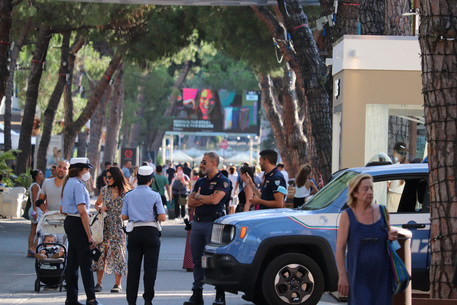 (ANSA) - RICCIONE, AUG 23 - Two gangs of young men were arrested in the Romagna Riviera resort of Riccione Monday on suspicion of vandalising property.
The youths, around 30 in all, were caught on CCTV damaging cars in the centre of the seaside town, police said.
Many of them are of north African origin, police said.
They were allegedly led by two young Moroccan men, aged 23 and 24, police said.
The pair, who live in Lecco north of MIlan, have reportedly been arrested on charge of robbing money, cell phones and gold chains from two tourists.
One of the groups of alleged vandals, all north African, also robbed two 18-year-old tourists of 50 euros, a cellphone and a gold necklace, police said.
Two second-generation Moroccans from near Biella north of Milan, aged 20 and 21, were arrested and taken into prison custody.
Ex-premier Silvio Berlusconi's centre-right Forza Italia (FI) Senate Whip Anna Maria Bernini said teen and youth gangs were a national emergency. (ANSA).