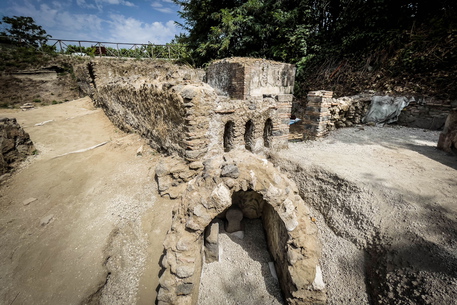 (ANSA) - NAPLES, AUG 17 - A "unique" tomb containing a semi-mummified body has been found at Pompeii, officials said Tuesday.
The body dates back to a time when dead bodies were always incinerated in the ancient Roman city near Naples.
Instead, in this case, the body was semi-mummified and placed in a burial chamber in the tomb.
Also found was an inscription confirming that Greek was spoken in the theatres of the Roman colony on the Bay of Naples, destroyed and preserved by an eruption from Mount Vesuvius in 79 AD.
"A lot is expected of the new find," Pompei archaeological park director Gabriel Zuchtriegel and Valencia university archaeologist Llorenç Alapont told ANSA.
Culture Minister Dario Franceschini said "Pompeii never stops amazing us, it is the pride of Italy".
Former Pompeii director Massimo Osanna said the Greek inscription "is an extremely interesting testimony, which must be linked to the others that we have of the presence of Greeks and above all Greek culture in Pompeii".
He said that Greek culture, especially its artists and its classic plays, was "all the rage in Pompeii".
The discovery of the mysterious tomb of the freed slave Marcus Venerius Secundio, Osanna said, is in some ways "confirmation of the triumph of Greece in the highest milieux of the Latin colony".
Alapont, the Valencia university archaeologist, said the man in the tomb "may well have had himself buried and even embalmed with the precise intention of preserving his body from the moisture of the grave".
He said "the tomb at the Sarno gate is really an extraordinary discovery because of all the information it can give us, a unique burial for that era in Pompeii, and it may in some ways also change our knowledge on the rules of death rites in the Roman world".
Marcus Venerius Secundio was a freed slave who had previously been a guardian of the Temple of Venus in Pompeii, a very important monument because the Romans named the city after that deity.
He had also been a 'minister' of the Augustali priests and finally, after his liberation, also an Augustale himself, one of the college of priests of the imperial cult.
He had earned enough money to pick a tomb in a very prestigious site, Alapont said. (ANSA).