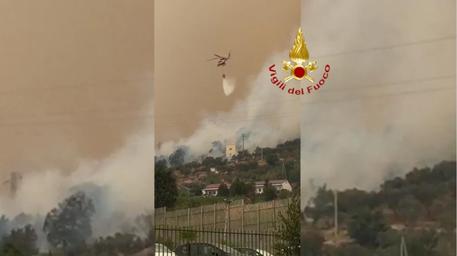 (ANSA) - ROME, AUG 12 - Firefighters are battling hundreds of blazes that are being helped by the Lucifer heatwave and are devouring many hectares of forest in various parts of Italy on Thursday, with Calabria, Sicily, Sardinia and Campania hit especially hard.
The wildfires claimed three lives on Wednesday, two in Calabria and one in Sicily.
The European Commission said Thursday that two French Canadair water-bomber aircraft will be sent to help the firefighting effort in Italy via the European Civil Protection Mechanism, once they have completed their operations in Greece, The Lucifer heatwave saw a temperature of 48.8°C registered in the province of Siracusa on Wednesday by Sicily's SIAS agency in what, if confirmed, will be a new European record.
What's more, according to forecasts, the heatwave has not reached its peak yet.
That is expected to come on Saturday when 17 cities are set to be on red alert.
When a city is on red alert it means the heat is so intense it is a danger to the health of the general population and not just the elderly and the fragile.
The 17 cities that will be on red alert on Friday are Ancona, Bari, Bologna, Bolzano, Brescia, Cagliari, Campobasso, Florence, Frosinone, Latina, Naples, Palermo, Perugia, Rieti, Rome, Trieste and Viterbo.
Ten of those cities were on red alert on Thursday.
Scientists say the climate crisis is causing heatwaves and extreme weather events, such as wildfires, to be more frequent and more intense. (ANSA).