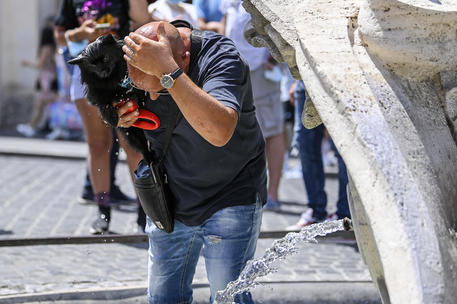 (ANSA) - ROME, AUG 10 - The number of Italian cities on red alert due to the potential impact of the heat on people's health is set to rise from four on Tuesday to 10 on Thursday, the government said.
Temperatures are forecast to reach as high as 48° in the next few days in parts of southern Italy as the 'Lucifer' heatwave intensifies in what is expected to be the hottest week of the year.
The four cities on red alert on Tuesday are Bari, Campobasso, Rieti and Rome.
The number will rise to eight on Wednesday and then 10 on Thursday with Bologna, Frosinone, Latina, Palermo, Perugia and Trieste joining the four.
Italy's Civil Protection Department has warned that the risk of wildfires is set to increase throughout the nation this week due to the heatwave.
Many regions have been hit by devastating wildfires in recent weeks, with Sardinia, Sicily and Abruzzo hit particularly hard.
Scientists say the climate crisis is causing heatwaves and extreme weather events to be more frequent and more intense.
(ANSA).