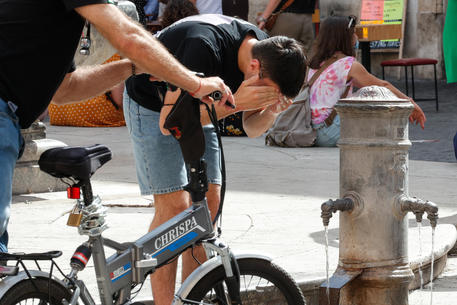 (ANSA) - ROME, AUG 9 - The health ministry said Monday that four of the 27 major Italian cities it monitors will be put on red alert on Tuesday because the current heatwave is set to intensify while nine will be on orange alert.
Then eight cities will be on red alert on Wednesday and 13 will be on orange alert.
The www.iLMeteo.it website has forecast that temperatures could reach 47-48° in parts of southern Italy and on the islands of Sicily and Sardinia between Tuesday and Thursday.
But other cities, such as Rome, Florence and Bologna, will see temperatures go as high as 38°, with high humidity levels making things even more uncomfortable.
Italy's Civil Protection Department has warned that the risk of wildfires is set to increase throughout the nation this week due to the heatwave.
Many regions have been hit by devastating wildfires in recent weeks, with Sardinia, Sicily and Abruzzo hit particularly hard.
On Sunday firefighters were battling against blazes in several parts of Sicily, on the Aspromonte mountain in Calabria and in the northern province of Cesena, in Emilia-Romagna. (ANSA).