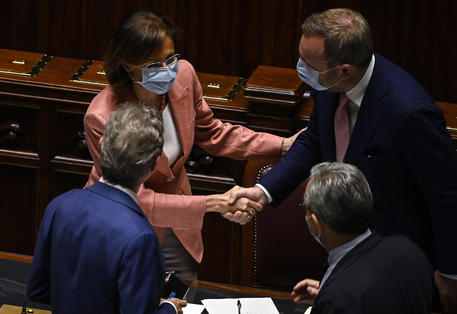 (ANSA) - ROME, AUG 4 - The government's reform of Italy's criminal justice system was approved by the Lower House on Tuesday and is set to move to the Senate in September after parliament's summer recess. The reform, aimed at speeding up the system, was approved with 396 votes in favour, 57 against and three abstentions.
The package caused considerable tension within Premier Mario Draghi's coalition before a compromise was reached at a cabinet meeting last week.
The reform, drafted by Justice Minister Marta Cartabia, sets limits on the time it can take to rule on first appeals and on cases at the supreme court.
It effectively waters down a reform passed by Alfonso Bonafede, a 5-Star Movement (M5S) lawmaker who was the justice minister in ex-premier Giuseppe Conte's two coalition governments from June 2018 until the start of this year.
Bonafede's reform puts the statue of limitations on hold after the first-instance ruling in order to stop criminals getting off because their cases get timed out due to the slowness of the legal system.
The judiciary's self-governing body, the CSM, said a huge number of cases would end up being shelved if the Cartabia reform had been is approved in its original form.
The M5S demanded changes to the reform to stop this happening, which led to a compromise in which crimes regarding the mafia, terrorism, sexual violence and criminal association are handled under a different regime.
Some M5S members were not satisfied though.
Two M5S MPs voted against the reform on Tuesday and 16 were absent.
Speeding up Italy's notoriously slow judicial system is necessary, among other things, because the granting of EU COVID Recovery Plan funds is conditional upon it. (ANSA).