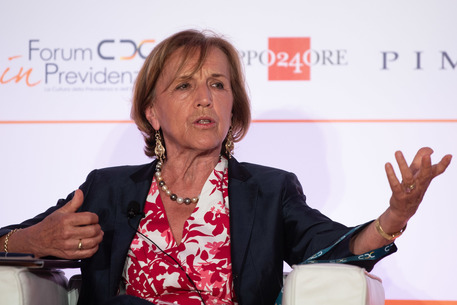 (ANSA) - ROME, JUL 20 - Rightwing League leader Matteo Salvini on Tuesday dismissed the appointment as government advisor of a former labour minister he demonised because she tearfully made thousands of people jobless and pensionless overnight at the height of the debt crisis in 2011.
Elsa Fornero, a respected academic who served as former premier Mario Monti's labour minister in his 2011-2013 emergency austerity administration, has been named as an economic advisor to Premier Mario Draghi.
Salvini, who waged a relentless campaign of vituperation against her after she created the so-called 'esodati' or 'exiled ones," said Tuesday "Formero? she counts less than zero for me".
Fornero, 73, is an economist, university lecturer, and politician who served as Minister of Labour, Social Policies, and Gender Equality in the Monti cabinet from November 2011 to April 2013.
Fornero was accused by many journalists, media, and politicians belonging to opposition parties of acting with a snobbish attitude towards the problems of common people during the economic crisis. Her statement that "nowadays, a job would not be a right anymore" and that young people should not be too "choosy" (using the word in English) about seeking work became quite famous.
In December 2011, shortly after her appointment to the government post, Fornero cried publicly while presenting her new austerity measures.
Salvini is an enthusiastic supporter of former European central banker Draghi while his closest ally, Giorgio Meloni of the Brothers of Italy (FdI) party, is the only major party leader not to have joined his national unity administration and uses that position to voice strong opposition to many of its policies. (ANSA).