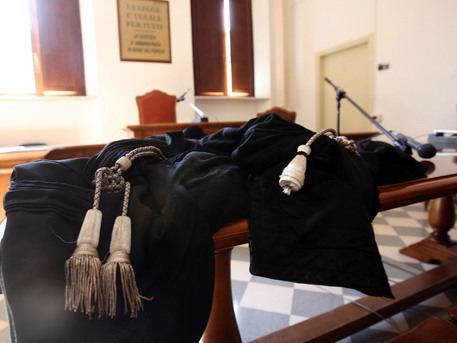 (ANSA) - ROME, JUL 20 - The government's justice reform bill to speed up Italy's notoriously slow system must be changed after the country's top 'Ndrangheta prosecutor said it will kill 50% of Italy's criminal trials, the ruling 5-Star Movement (M5S) said Tuesday.
Due to a shortening of the statute of limitations, half of the trials will be timed out before they come to judgement, said Nicola Gratteri, who leads the fight against Italy's richest and most powerful mafia.
Speaking to the House justice committee, he said he feared one of the consequences of the reform, which is one of the key conditions for the EU-funded Recovery Plan and which has still to be approved by parliament, would be the demise of seven major trials against 'Ndrangheta in and around Catanzaro.
Mafia and corruption trials would be equally hit despite a provision in the reform plan to have the statute of limitations lengthened by a year for them, said Gratteri.
In its current form, the reform framed by Justice Minister Marta Cartabia sets a two-year limit on the statute for first appeals, and a further one-year limit on appeals to the supreme court - barring mafia and the other most serious crimes that would have the one-year extension.
Gratteri said, despite that provision, that "in concrete terms the consequences will be the diminishment of the level of security for the nation, seeing as how it will be even more attractive to commit crimes".
The populist M5S, which is the biggest party in Mario Draghi's national unity government, reacted to Gratteri's alert by reiterating that the Cartabia reform must be changed in parliament.
In a statement, M5S MPs said Gratteri's testimony to the House panel "was dramatically clear: the criminal justice reform drawn up by Minister Marta Cartabia must be modfiied".
The statement said "of all the criticisms voiced by Gratteri, the ones that concern us the most, because they spell worrying scenarios, are those relating to the concrete consequences: 'greater incentive to commit crime' and 'diminishment of the nation's security level'." New M5S leader Giuseppe Conte, Draghi's predecessor as premier, told the former central banker Monday that his formerly anti-establishment party would be vigilant on the justice reform debate to make sure that it did not result in "impunity".
Cartabia reacted to the renewed criticism by saying that "the political forces are pushing in diametrically opposed directions, but this reform must be achieved because the status quo cannot remain as it is." She said Italian and European norms said the new statute of limitations would mean a "reasonable trial duration, which is a Constitutional principle".
She said the Recovery Plan, officially called the National Recovery and Resilience Plan (NRRP), for whose implementation the justice reform is essential, embodied "a unique opportunity, not to be missed".
Democratic Party (PD) House Whip Debora Serracchiani said there was the possibility of "adjustments" to the new statute of limitation rules. (ANSA).