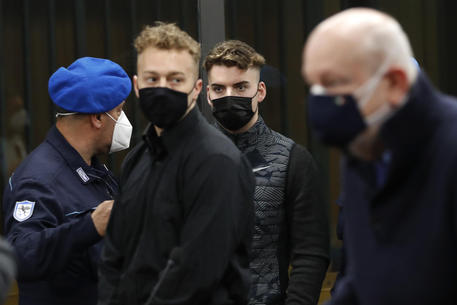 (ANSA) - ROME, JUL 16 - A Rome court on Friday released the explanation of its May decision to give two young American men, Finnegan Lee Elder and Christian Gabriel Natale Hjorth, life in prison for the homicide of Carabinieri police officer Mario Cerciello Rega in July 2019.
Elder killed Cerciello Rega with 11 stab wounds inflicted by a combat knife he had brought over from the US while Natale Hjorth assaulted the slain officer's partner at the end of a chain of events sparked by a drugs deal that went wrong.
Cerciello Rega , 35, had recently returned from his honeymoon when he was killed.
The judges said the personality of the defendants was "alarming, despite their young age".
The explanation talked of the "disconcerting perpetration of serious criminal acts in an disturbing escalation of illegality".
It said they upheld "deviant models of behaviour" with the "glorification of drugs, the ostentation of weapons and money as symbols of success, as documented by the photos found on mobile telephones" and said this highlighted "the clear criminal capacity of both".
The judges also explained why they had given life sentences to both of the defendants.
"Both Elder and Natale acted according to a premeditated plan in which the lethal event was a predictable, probable consequence of the conduct actively adopted by the two," the explanation said. (ANSA).