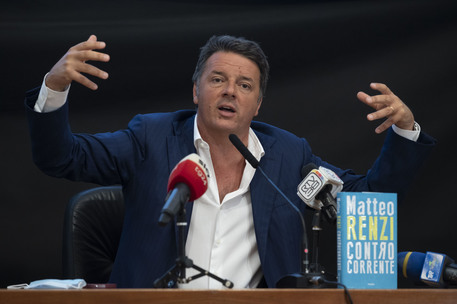 (ANSA) - ROME, JUL 14 - Ex-premier Matteo Renzi is under investigation for fake invoices on allegedly non-existent transactions in relation to his compensation for a conference in Abu Dhabi, the centrist Italia Viva (IV) party leader discloses in his new book, Controcorrente (maverick, or against the tide).
Florentine prosecutors are working on the case, he says.
The revelation comes a day after a report that Rome prosecutors are investigating Renzi for illegal party funding and issuing fake invoices in relation to a documentary he made about his native Florence.
Renzi has been placed under investigation on suspicion of illegal party funding and issuing false invoices together with VIP manager Lucio Presta, the daily Domani reported Tuesday.
It said Rome prosecutors placed Renzi, former leader of the centre-left Democratic Party (PD) under investigation a few weeks ago "in relation to a probe into economic ties between Renzi and the TV agent".
The probe reportedly centres on bank transfers for the documentary Florence According To Me, transactions which ended up in an anti-money laundering report by the Bank of Italy's financial fraud office UIF in 2019.
Renzi has been criticised for conferences in Middle Eastern Arab states including one in Saudi Arabia where he praised Prince Mohammed bin Salman, whom the CIA say ordered journalist Jamal Kashoggi's murder and dismemberment in the Saudi consulate in Istanbul in October 2018, as the promoter of a "new Renaissance" in Saudi Arabia.
As well as boosting MBS as a reformer, Renzi said he envied labour costs in Saudi Arabia, where many immigrant workers are paid slave wages in appalling living and working conditions.
Renzi has promised to explain his remarks, while acknowledging that the labour cost comment was "not one of my best".
The former centre-left Democratic Party (PD) leader, who sparked a government crisis by pulling IV out of Giuseppe Conte's ruling coalition leading to Mario Draghi's appointment at the head of a national unity government, has been widely criticised for his paid speech in Riyadh. (ANSA).