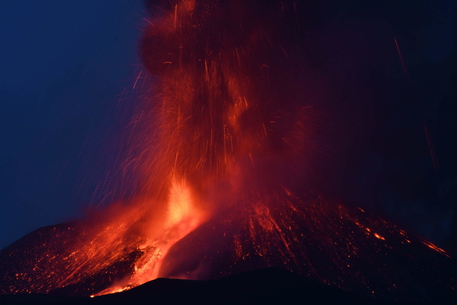 (ANSA) - CATANIA, JUL 14 - Etna on Wednesday belched out another lava plume and a six-kilometre-high column of ashy smoke in the latest of a string of spectacular eruptions from Europe's tallest active volcano.
The iconic volcano spewed ash and lapilli into the towering column.
The ash was scattered onto nearby Catania but the eastern Sicilian city's airport's air space was not closed, as it has been for some recent eruptions.
The volcano also emitted a fresh lava flow.
Volcanology institute INGV said it was the latest "paroxysm" in Etna's new phase of volcanic activity, which began in mid-February.
The INGV also said it had found the "beating heart" of the volcano which is fuelling the activity, and "the energy inside the volcano is increasing". (ANSA).