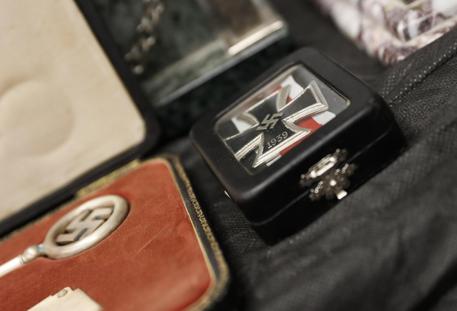 (ANSA) - AOSTA, JUL 7 - A 57-year-old Val d'Aosta man was fined 5,000 euros Wednesday for installing a Nazi eagle and triangles worn by concentration camp inmates on two gates outside his house in Saint-Vincent.
Fabrizio Fournier was also found guilty of posting Holocaust denial sttaments on social media including the comments "the gas chambers are fake news" and "people were put down as monsters who were not that, such as the great Adolf Hitler".
Fournier, who called himself 'Nazi', also posted a Facebook photo of him giving the Nazi saluate and complained that he had been born on Holocaust Remembrance Day, January 27.
He was found guilty of instigating hatred.
He was also sentenced to pay compensation to three civil plaintiffs: 20,000 euros to Turin's Jewish community, 10,000 euros to the Val d'Aosta regional government, and 5,000 euros to Italian partisans association ANPI. (ANSA).