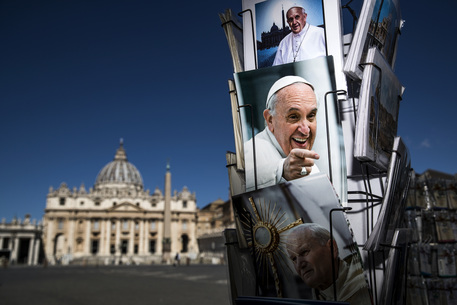 (ANSA) - ROME, JUL 5 - Pope Francis is in good physical condition and will stay in hospital for seven days after a three-hour successful operation to open a narrowing in his colon, Vatican spokesman Matteo Bruni said Monday.
"His Holiness Pope Francis is in good general condition, awake and breathing spontaneously," said the head of the Vatican press office.
"The surgical intervention for the diverticular stenosis performed on the evening of July 4 involved a left hemicolectomia and had a duration of about three hours.
"A stay of seven days is expected barring complications".
Bruni said the scheduled operation, which had gone well, ended at around 11 o'clock Friday night.
Sources said earlier that Pope Francis had a tranquil night at Rome's Policlinico Gemelli hospital after undergoing the colon surgery on Sunday.
The Vatican said late on Sunday that the Argentine pontiff had responded well to the surgery by a 10-strong team of doctors. It said the operation was scheduled.
He is in the same area of the Gemilli complex where Pope John Paul II stayed during the spells in hospitals he had during his papacy. Two Vatican nurses are among the team taking care of the pope, sources said.
In a statement the government said Italian Premier Mario Draghi expressed "affectionate wishes of a rapid convalescence and a speedy recovery for the Holy Father after the operation".
Cardinal Enrico Feroci said he had spoken to another top clergyman, Angelo De Donatis, the Vicar General of His Holiness, who reported that "the pope is well". (ANSA).