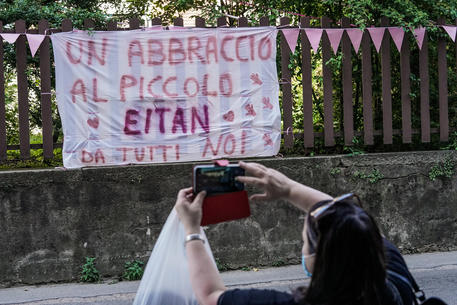 (ANSA) - ROME, JUN 10 - Eitan Biran, the five-year-old Israeli boy who was the sole survivor of the Mottarone mountain cable-car disaster in Piedmont last month, was discharged from Turin's Regina Margherita children's hospital Thursday and returned home with his aunt, his only surviving relative.
Eitan's parents, great grandparents and two-year-old brother were among the 14 victims of the disaster.
Prosecutors have said the three people suspected of being responsible for the May 23 cable-car disaster in Piedmont face charges of "extraordinary gravity".
The owner of the company that runs the cable car, the company's director and the service's operational chief have been arrested over the disaster.
Prosecutors in the city of Verbania said the cable car's emergency braking system, which should have prevented the disaster after one of the cables snapped, was deactivated deliberately "for economic reasons in total disregard for the most basic safety rules".
The emergency braking system was allegedly deactivated to stop it kicking in and halting the service after a series of recent technical problems.
In the warrant for the detention of the three, the prosecutors wrote that the operation chief "admitted to having deliberately and repeatedly inserted brake-blocking devices, deactivating the emergency braking system".
They said the director and the owner did not allow "the necessary maintenance operations" to take place. (ANSA).