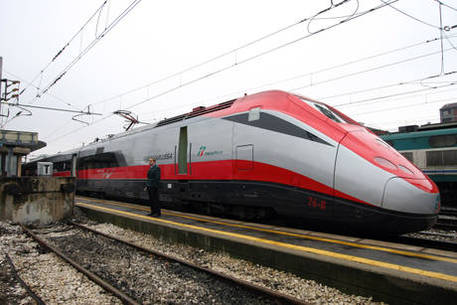 (ANSA) - BRUXELLES, 06 MAG - The Milan-Bologna high-speed rail line has transformed mobility, operating as "an accelerator for national connectivity", according to a research project called Imagine, carried out within the framework of the ESPON programme, which is specialized in examining EU regional policies..
It has also produced "small improvements" at the interregional level, while making the infrastructure resemble more "a pipeline than a backbone" as far as local transport is concerned.
"The high-speed corridor has had a significant effect on various elements of mobility," the researchers write, with positive effects on journey times between the provincial capitals, reduced on average to 60 minutes, and on passenger flows.
Although there are no data on this last element, the fact that commuting has increased can be deduced from the number of daily trains trips, which have doubled since 2008, and an improvement in occupancy rates.
"The extra capacity of this corridor created by the new train line, coupled with the potential high demand, explains the successful experience of the competition" between rail operators Italo and Trenitalia, a competition that has "amplified the positive effects of the train line", the researchers say. "The only negative effect that has been observed is the loss of connectivity between the intermediate cities, which the new high-speed station at Reggio Emilia has only slightly improved".
In other words, the Milan-Bologna high-speed train line has contributed to reinforcing the short and long-distance routes between the main cities, while weakening medium-distance ones and those for intermediate cities, the researchers explain.
The high-speed corridor has, therefore, produced a "hierarchization of some cities at the expense of others", functioning as "a pipeline" rather than as a "backbone". "One can't say that the high-speed line has reduced regional mobility, but it can be said that regions have not paid sufficient attention to interregional mobility," explains Paolo Beria, who teaches transport economics at Milan Polytechnic and took part in the research.
"They should plan with each other and with Trenitalia.
"In a highly connected urban area like the one between Milan and Bologna, with highly dynamic mobility over tens of kilometres, you need a service that is regional," Beria concludes.
"Trains have to be frequent, relatively cheap, and travellers must be able to buy a ticket just before the journey.
"Even for commuters, success is linked more to the success of Milan and Bologna than to the high-speed corridor". (ANSA).