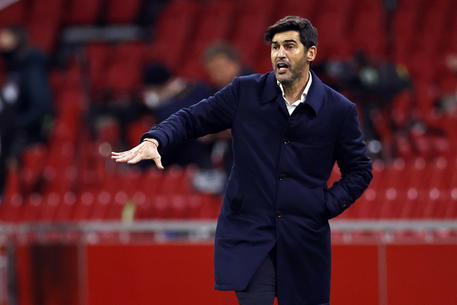 (ANSA) - ROME, MAY 4 - AS Roma said Tuesday that they will part company with coach Paulo Fonseca at the end of the season.
The move had been widely expected.
The Roman team are seventh in Serie A and out of the hunt to qualify for next season's Champions League and their hopes of winning the Europa League are close to zero after last week's 6-2 defeat at Manchester United in the first leg of the semi-final.
The three-time Italian champions are reportedly close to signing former Napoli, Chelsea and Juventus boss Maurizio Sarri as Fonseca's replacement.
Fonseca joined Roma in 2019 after a successful stint at Shakhtar Donetsk.
"Over these last two years we have experienced a number of highs and lows, but I have always given my all for this club and this city - a city that has always been so welcoming," the Portuguese coach said in a statement on the club's website.
"I would like to thank the Roma fans, everyone we have worked with at (training complex) Trigoria, the players, and all those who have helped us during this journey...
"We still have some very important games in front of us this season that we want to win, and we will continue to give our all in order to do so". (ANSA).