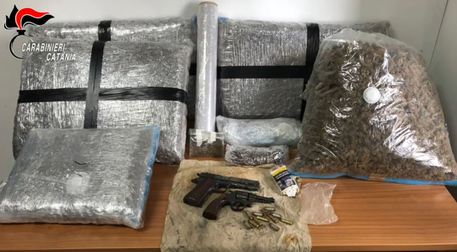 (ANSA) - CATANIA, MAY 4 - Italian police on Tuesday arrested 40 people in a sweep of Catania-based Cosa Nostra clans that also bagged alleged mafiosi operating in Siracusa, Cosenza and Bologna.he 40 have been charged with mafia association, drug trafficking, extortion and conspiracy to commit fraud against social security and pensions agency INPS.
Police said their investigation had enabled them to map out the power and command structure of the Santapaola-Ercolano clan at Paternò and Belpasso, two towns near Catania.
Police said they had found a "picture of grave mafia pollution of the economic fabric, as shown by the identification of several businessmen who willingly favoured the clan's illicit activities".
They cited the example of a fruit and vegetable company owner who used the clan's protection to beat competitors and help him settle loans.
The Santapaola-Ercolano clan, police said, was planning to bring in "huge" quantities of cocaine in banana containers from Ecuador.
The mafiosi also allegedly stashed marijuana in the local cemetery, police said.
The clan is run from prison by superboss Benedetto 'Nitto' Santapaola. (ANSA).