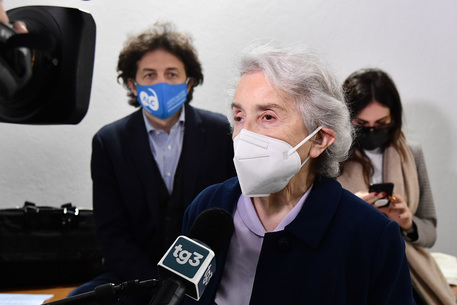 (ANSA) - ROME, APR 28 - An Italian appeals court on Wednesday acquitted right-to-die activists Mina Welby and Marco Cappato for helping multiple-sclerosis sufferer Davide Trentini commit assisted suicide in Switzerland in April 2017, upholding the first-instance court's acquittal.
The prosecutor in the appeals case had requested their acquittal.
53-year-old Tuscan Trentini, who was accompanied to the Dignitas clinic in Zurich by Welby with Cappato's help, voiced the hope in a farewell letter that Italy would become a "civilised" country where euthanasia would be possible.
"I really hope that Italy becomes a more civilised country, finally passing a law that lets people end enormous suffering, without end, without remedy, in their own homes, close to their loved ones, without having to go abroad, with all the difficulties involved without excessive expenditure," wrote Trentini.
The scientific head of Exit Italia, of which Trentini was a member, Silvio Vitale, said: "I don't hesitate to express our satisfaction that Davide Trentini, one of our members, was able to legally die in Switzerland.
"There remains the anger that he could not do so in Italy among his friends".
Vitale said "I, like many other doctors, "am ready to do as my colleagues in Switzerland, Netherlands and Belgium do, and I hope that day is not far off.
Vitale added: "A thank you to Mina Welby who accompanied him, challenging the hypocrisy of Italian law".
Many Italians including the headline-grabbing blind and tetraplegic disc jockey DJ Fabo have been helped to commit euthanasia by the campaigning Luca Coscioni Association, and especially its treasurer Cappato.
Welby, the co-chair of the association, like Cappato reported herself to Carabinieri police for assisting a suicide, which is a crime in Italy. (ANSA).