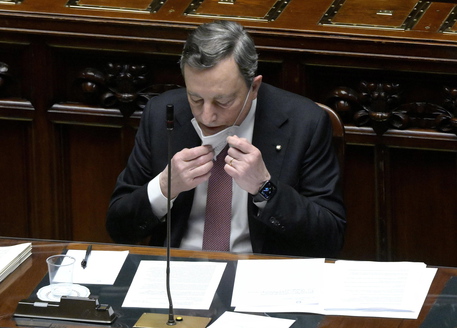 (ANSA) - ROME, APR 26 - Italy's destiny is at stake in the government's almost 250-billion-euro post-COVID Recovery Plan, Premier Mario Draghi told the House Monday.
"We would all be wrong to think that the (National Recovery and Resilience Plan) PNNR, albeit in its historic importance, is only a collection of projects, numbers, deadlines, objectives," he said in unveiling the EU-funded plan.
"In the combination of the programmes there is also, and above all, the destiny of the country".
The premier, who was appointed with the aim of shepherding the plan as well as the COVID vaccination rollout and recovery, said "we have the honour and the onus of preparing the Italy of tomorrow".
Draghi said Italy's credibility in the EU and the world was at stake.
He said that "delays and short-sighted partisan visions" would weigh heavily on lives.
The primary goal of the PNRR, Draghi said, was to repair the damage of the pandemic.
The premier's office would coordinate the implementation of the plan while the economy ministry would monitor the process, he said.
Individual ministries and local bodies will be responsible for carrying it out.
This PNRR focuses on four areas - Italy's public administration, the justice system, simplification of legislation and the promotion of competition.
It sets targets, missions and priorities.
The plan estimates that its measures will see the Italy's GDP at least 3.6% higher in 2026 than it would have been otherwise.
The PNRR is based on 191.5 billion euros from the EU's Recovery Fund and 30 billion from a complementary fund, plus another 26 billion for specific projects, making a grand total of 248 billion euros, Draghi said.
The plan will have six missions: digitization, innovation, competitiveness and culture for 50 billion; the green revolution and the ecological transition for 59.3 billion; infrastructures for sustainable mobility for 25.3 billion; education and research for 31.9 billion; jobs, inclusion and cohesion for 22 billion, also focusing on closing the gender gap; and health for 15.6 billion (plus other funds bringing the health total up to 19.72 billion).
The plan sees 500 million euros going to Rome to invest in the restoration of monuments and in preparation for the 2022 Ryder Cup and the 2025 Jubilee.
Among the supplementary projects, Draghi said, will be the completion of the Salerno-Reggio Calabria high-speed rail line, which will become "really high speed", as well as the Vicenza tranche of high speed line between Milan and Venice.
Draghi also said there was a "strong attention for gender inclusion and support for young people".
The premier said "we must eliminate the obstacles to women entering the work place".
He added that there would be no cut, as rumoured beforehand, to the so-called 'superbonus' for home improvements, which was an important measures for the construction and environmental sectors.
Draghi also said the so-called 'single checque' "will become the central and all-inclusive tool for supporting households with children, replacing the fragmentary measures hitherto in force." There will also be a State guarantee for young people buying their first homes, he said.
Young people, he said, would be among the major beneficiaries of the Plan.
In addition, Draghi said, there would be home assistance for 10% of the non-self-sufficient over 65s.
Draghi also said: that the south of Italy would be a priority getting over 50% of the infrastructure budget; that the aim of the plan was to reduce the times of civil trials by 40%; and that a decree implementing the plan would be ready by the end of May.
"I have faith in the Italians, I'm certain we will implement this Recovery Plan," he ended by saying.
"I am certain that honesty, intelligence, and a relish for the future will prevail over corruption, stupidity, and vested interests".
Italy is getting the biggest chunk of the EU's 750 billion euro Recovery Fund.
The money will come in grants and low-interest loans.
It will be spent over 5-6 years. (ANSA).