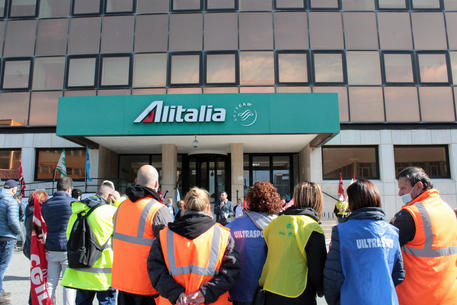 (ANSA) - ROME, APR 22 - Premier Mario Draghi's government has okayed an advance of 50 million euros to Alitalia as part of aid for revenues lost in 2020 due to COVID-19 restrictions in order to enable the troubled airline to pay workers' salaries for April, sources said on Thursday.
The loss-making former flag-carrier has been in extraordinary administration for years and the pandemic has made its plight even worse.
The government wants to restructure the airline, via the launch of new State-controlled company, ITA.
According to the plan, ITA would get State cash to buy many of Alitalia's assets and it would hire around 11,000 of its workers.
But the negations between Rome and Brussels on how to allow the move to proceed while complying with EU law are proving tough.
The European Commission has asked ITA to show there will be "discontinuity", reportedly asking for the Alitalia name to be dropped and many of the carrier's slots at Milan's Linate airport to be released.
The 50-million-euro advance is part of an estimated 350 million set aside to Alialia to help cover 2020 losses, 195 million of which have already been paid out.
It was given the green light in an article in the decree approved by cabinet on Wednesday setting out the system of COVID-19 restrictions that will be in force from next week, the source said. (ANSA).