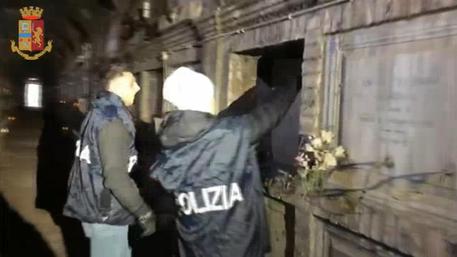 (ANSA) - VIBO VALENTIA, FEB 8 - Italian police on Monday arrested three people at the seaside resort town of Tropea near Vibo Valentia in Calabria on suspicion of illegally removing bodies from tombs at the local cemetery to make way for fresh bodies.
The three were all cemetery workers.
They allegedly extorted money from mourning relatives to get their late loves ones a place in the cemetery, police said.
The remains they removed from the graves were either burned or thrown into rubbish bins, police said.
The arrestees were named as Francesco Trecate, 62, his son Salvatore (38), who has a record for petty crime, and Roberto Cintartese (53), all from Tropea.
"The crimes were carried out with spinechilling conduct and offending the piety of the dead", said Vibo Valentia chief prosecutor Camillo Falvo.
"They disposed of the bodies mercilessly and ruthlessly," he said. (ANSA).