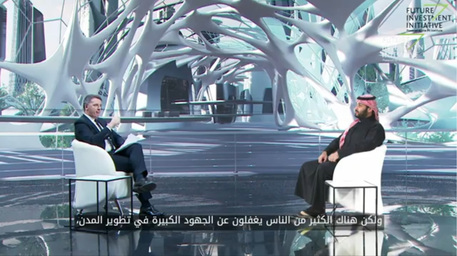 (ANSA) - ROME, FEB 1 - Ex-premier Matteo Renzi has promised to explain his controversial trip to Saudi Arabia last week once Italy's government crisis is over.
Senator Renzi, whose centrist Italia Viva (IV) party triggered the crisis, has come under heavy fire for interviewing Saudi Crown Prince Mohammed bin Salman during the country's annual Future Investment Initiative (FII) event in Riyadh.
At one point Renzi said he thought the Middle Eastern country could be the home of a "New Renaissance".
Critics highlighted the country's human rights record and the murder of journalist Jamal Khashoggi at the Saudi consulate in Istanbul in 2018.
Anti-mafia writer Roberto Saviano said via social media at the weekend that "Matteo Renzi should have the dignity to leave our country's public life".
Renzi has said he will give a press conference the week after the end of the government crisis to explain his "international positions" and his ideas about Saudi Arabia and the Middle East.
Last week Italy halted the sale of arms to Saudi Arabia and the United Arab Emirates over their involvement in the conflict in ravaged Yemen. (ANSA).