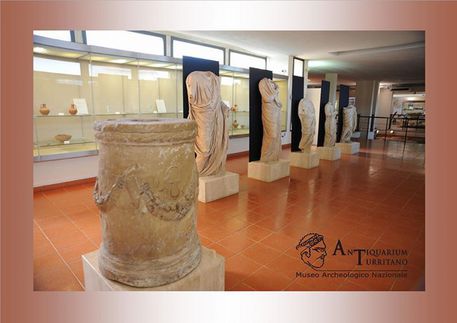 (ANSAmed) - NAPLES, 26 GEN - Jewels and paintings from the House of the Golden Bracelet, silver tableware found years ago in Moregine, and a unique crater in bronze by Giulio Polibio are some of the things to be seen in the soon to be reopened Antiquarium of Pompeii.
There is also the charcoal writing that shifted the date of the eruption to October, the "witch's treasure" with coloured amulets found in the House with a Garden, as well as the casts of two fleeing people, a result of excavations a few months ago in the Civita Giuliana villa.
A week before the first reopening to the public, Pompeii has revealed its new Antiquarium, renovated and transformed into a true museum of the city telling its history, from the Samnite period to its destruction in 79 AD.
At the same time it will be exhibiting its most valuable treasures alongside a large portion of the most famous discoveries of the latest excavations.
The inauguration took place Monday.
"Many of the iconic pieces exhibited in the shows around the world were not actually available for Pompeii visitors,'' ANSA was told by Luana Toniolo, archaeological official and head of the new Antiquarium. "For security reasons there were held in our storage rooms." Now, instead, they will be on display alongside a "chat bot", or digital assistant, to convey the various seasons experienced by Pompeii before it became the large city that we know through its crystalization at the time of the eruption.
Pompeii director Massimo Osanna stressed that "Pompeii finally has a museum, and it is a unique one". (ANSA).