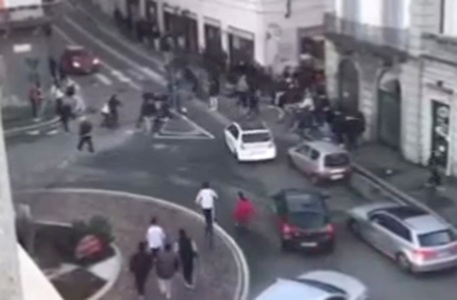 (ANSA) - MILAN, JAN 21 - A turf war and jealousy spurred by a visit to two local girls sparked the street fight in central Gallarate that involved about a hundred youths on January 8, local daily La Prealpina said Thursday.
A 14-year-old boy was hurt and a dozen youths cited after the brawl in the town north of Milan.
Witnesses cited by La Prealpina said two boys from Malnate went to see two girls from Cassano Magnago near Gallarate after meeting them on social media, sparking the jealousy of two local boys who were interested in them.
The four had an initial fight which then led to a showdown in the centre of Gallarate that youths showed up for after being alerted on WhatsApp, Facebook, and Instagram, the daily said.
Youth street fights are becoming ore common in Italy, and there was a deadly one near Rome in September.
The most recent big street fight too place in Rome on the night of January 4, and a 29-year-old man was arrested for going and getting a handgun to defend one of the two rival groups.
The man, who was caught after a brief chase, was charged with affray, illegally bearing weapons and resisting arrest.
The other members of the two groups managed to elude police.
Police fired two shots into the air to disperse them after spotting the man with the gun.
The fight took place in the eastern Centocelle district of the Italian capital.
Last month several youths, some with criminal records and some minors, were identified after a mass street fight involving hundreds of young people on Rome's Pincian Hill on a Saturday night.
The dust-up, which featured gangs of youths without face masks or with their masks lowered, was reportedly arranged on social media by two girls, Rome daily Il Messaggero reported.
A pair of amateur boxing brothers were detained in the murder of a 21-year-old Italian-Cape Verdian man, Willy Duarte, in a street fight at Colleferro near Rome in September.
The Bianchi brothers, experts in mixed martial arts, allegedly killed cook Duarte because he stepped in to help a friend in a scuffle on September 6.
On October 8 President Sergio Mattarella awarded one of Italy's top honours, the gold medal, posthumously to Duarte and another person also recently killed while trying to help others, 51-year-old priest Father Roberto Malgesini.
Malgesini, who worked to help the poor and marginalised, was stabbed to death in central Como by a homeless migrant with mental-health problems.
Duarte's brutal alleged murder sparked calls for police to crack down on street violence, after a spate of other episodes.
(ANSA).