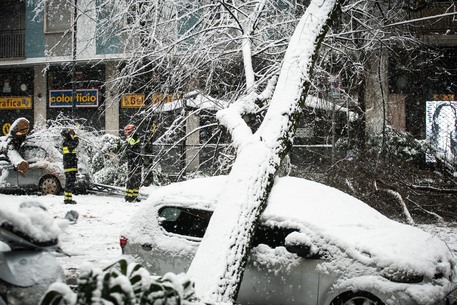 (ANSA) - ROME, DEC 28 - A wave of blustery and wintry weather swept Italy Monday and a fireman was electrocuted near Sassari in Sardinia after trying to fix a cable cut in two by icy blasts.
A woman was hurt by a lamppost blown down by gales in Milan, and in Rome a man was taken to hospital after being hit by a wind-felled tree.
Ice, frost, strong winds, rainstorms and snow storms have caused disruption in several regions.
Milan, Turin and Genoa woke up under a thick snowfall.
Traffic was disrupted on motorways between Liguria and Piedmont.
There was a risk of avalanches in Val d'Aosta and of coastal sea surges in Sardinia.
An orange weather alert was issued in Emilia Romagna and Puglia; and a yellow one in Abruzzo, Friuli,Lazio, Liguria, Marche, Molise, Tuscany and Umbria.
Ferry services to the islands of Elba and Capraia were interrupted.
The SuperG at Bormio was put off due to snow and fog.