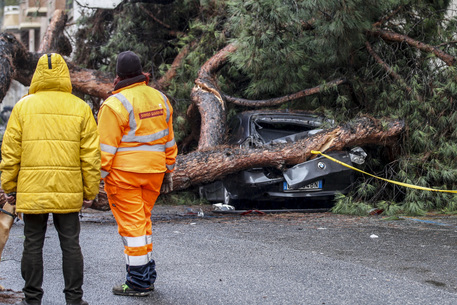 (ANSA) - ROME, DEC 9 - Bad weather is continuing to sweep Italy with torrential rain causing flooding in many parts.
There is a weather red alert in place Wednesday in Alto Adige and Campania.
An orange alert has been called in Basilicata, Calabria, Friuli Venezia Giulia, Umbria and Veneto.
The alert level is yellow in Abruzzo, Emilia Romagna, Lazio, Molise, Sardinia, Sicily and Tuscany.
In Friuli some 10,000 people are without electricity and many schools have been closed.
The railway through the Brenner Pass was interrupted again.
In Veneto there was a landslide on the Staulanza Pass and the town of Zoldano was cut off.
In Tuscany, state highway 12 was also hit by a mudslide and a 2.4km stretch of road was closed.
In Versilia on the Tuscan coast, the carcass of a wild boar was washed up on the shoreline, having drowned in recent floods.
Pelting rain also enlarged a sink hole at Giugliano near Naples.
A 20-metre tall pine tree was toppled by a gale in Rome, crushing an empty parked car with no one hurt.
In Venice, flood damage was said to be "immense" in St Mark's Square.
The lagoon city's MOSE flood-barrier system was lifted to protect the city on Wednesday after a miscalculation meant it was not raised in time to prevent flooding on Tuesday.
The system was not activated on Tuesday as the 'acqua alta' tide peak was not forecast to be as bad as it turned out to be.
MOSE takes some time to be activated and, by the time the authorities realised their forecasts were off the mark on Tuesday, it was too late.
Cinzia Zincone, the head of the public works department in the area, told ANSA on Wednesday that "we are trying to calibrate the opening and closing (of MOSE) in the best way".
She said a meeting would be held later on Wednesday to "analyse what happened yesterday and, if necessary, make significant changes to the procedures applied up to now for MOSE".
After some corruption scandals and many years of work and delays, the system finally came into use this year. It was not ready in time to stop the floods that devastated the city in 2019.
Zincone said the flood barriers would stay up for three days with more high tides forecast up until Friday. (ANSA).