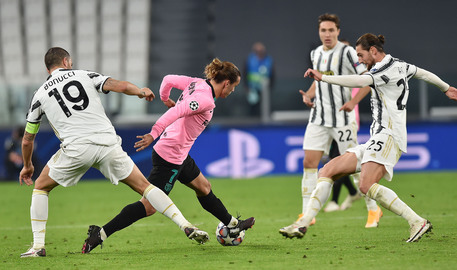 (ANSA) - ROME, OCT 29 - Italy defender Leonardo Bonucci has said that Juventus's 2-0 defeat at home to Barcelona in the Champions League on Wednesday will teach them a lot.
"The defeat certainly hurts," Bonucci said via social media.
"But it is through defeats that you grow in life. These are the matches that teach us a lot.
"It teaches us to believe more, to work more , to fight more".
The Turin giants were well beaten, with Barca's Ousmane Dembele scoring with a deflected shot from outside the box and Lionel Messi converting a late penalty.
Juve, who are rebuilding under rookie coach Andrea Pirlo and were without COVID-19-positive Cristiano Ronaldo, also had some bad luck, with Alvaro Morata having three goals disallowed for offside.
The hosts had defender Merih Demirel sent off in the closing stages for a second yellow card.
They are second in Group G with three points from two games, three behind leaders Barcelona.
Lazio, meanwhile did well to get a 1-1 draw at Brugge after their squad was decimated by suspected cases of COVID-19, which deprived them of forward Ciro Immobile, among others.
Lazio are joint top of Group F alongside Brugge with four points.
None of Italy's Champions League contenders won this week as Inter and Atalanta were both held on Tuesday. (ANSA).