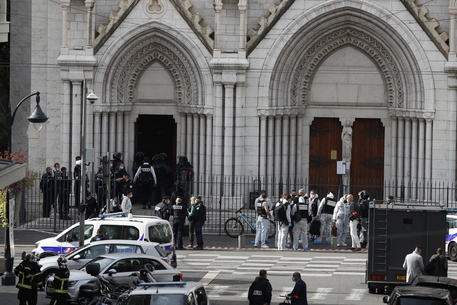 (ANSA) - ROME, OCT 29 - Premier Giuseppe Conte on Thursday expressed support for France after three people were stabbed to death in Nice in an attack by a suspected Islamist terrorist.
"The cowardly attack that took place in Nice does not lay a scratch on the common front to defend the values of liberty and peace," Conte said via Twitter.
"Our certainties are stronger than fanaticism, hate and terror.
"We embrace the families of the victims and our French brothers. Nous Sommes Unis!".
Foreign Minister Luigi Di Maio blasted the attack and voiced support for France too.
"Italy expresses profound condolences for the barbarous Nice attack," Di Maio tweeted.
"We are close to the French people and to the pain of the families of the victims.
"Italy repudiates all forms of extremism and remains at France's side in the fight against terrorism and all violent radicalism".
Police said that one of the victims of the attack at Nice's Notre-Dame Basilica, a woman, was beheaded. (ANSA).