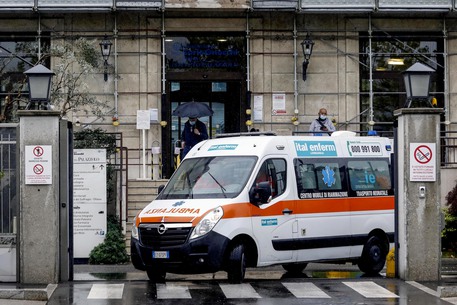 (ANSA) - PERUGIA, OCT 19 - A 35-year-old man of Moroccan origin was stabbed to death by a 42-year-old countryman after he made a pass at the latter's girlfriend at a party at Umbertide near Perugia on Saturday night.
The woman rejected the victim and an argument ensued, at the height of which the 42-year-old pulled out a knife and stabbed the victim, police said.
Police described it as a crime of passion.
The victim was said to have been drunk when he propositioned the woman.
The woman's boyfriend allegedly stabbed the man repeatedly with a kitchen knife and also hit him several times with a blunt object, police said.
An emergency team rushed to the flat but were unable to do anything for the victim.
Umbertide Mayor Luca Carizia said "sadly we are forced to record a very serious event that happened in our city overnight.
"It is an act of violence that we condemn unreservedly and which has seen the fresh involvement of fringes of a community which has also been involved in very serious episodes in the past".
Two years ago, in July 2018, a Moroccan was charged with murdering a co-national in a disused warehouse on the outskirts of Umbertide.
The two were undocumented immigrants who regularly slept in the building. (ANSA).