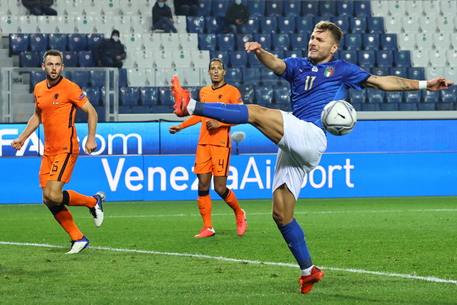 (ANSA) - ROME, OCT 15 - Italy coach Roberto Mancini said he remains confident his side will reach the Nations League final four after they dropped to second place in their group with Wednesday's 1-1 draw with the Netherlands in Bergamo.
Lorenzo Pellegrini put the hosts in front on 17 minutes, but Donny van de Beek equalised for the visitors shortly after.
Ciro Immobile blasted an excellent chance to win it for the Azzurri straight at the goalkeeper in the closing stages.
Italy have six points from four games, one behind Poland, who beat Bosnia and Herzovina 3-0 on Wednesday.
"If we win our next two games, we qualify," said Mancini.
"We knew it would be a tough game.
"The Netherlands made some changes; they played with an extra defender, and, aside from that, they're a strong team.
"It was a hard-fought game on both sides.
"We attacked and so did they, but I think we had more clear-cut chances". (ANSA).