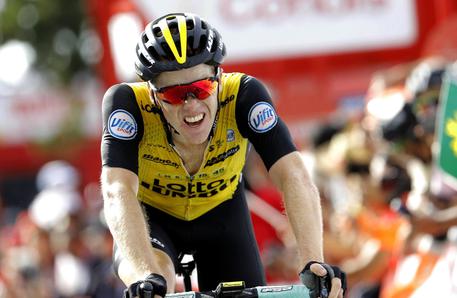 (ANSA) - ROME, OCT 13 - The 2020 Giro d'Italia lost another big name on Tuesday when ANSA learned that Dutchman Steven Kruijswijk was one of two more riders forced to pull out after testing positive for COVID-19.
Britain's Simon Yates, one of the favourites, had to withdraw from cycling's second-biggest stage race at the weekend for the same reason.
Indeed, Yates's Mitchelton-Scott team decided to pull out on Tuesday after four members of the team staff tested positive for the coronavirus too. Kruijswijk's Jumbo-Visma team quit too.
The other rider to test positive was Michael Matthews, an Australian rider for Team Sunweb who wore the pink leader's jersey during the 2015 Giro.
There were also two other team staff members to test positive, one from Team Ag2r-La Mondiale and the other from Team Ineos Grenadiers.
Kruijswijk was in 11th place in the general standings, 1'24" behind the leader Joao Almeida.

"The aim is to get to Milan on Sunday October 25," Race Director Mauro Vegni said regarding the final stage of the Giro, which was postponed from its usual slot in May because of the pandemic.
"We are doing everything possible to tackle this Giro in October and conclude it with dignity and respect of the rules".