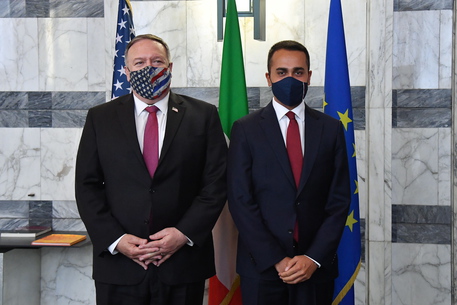 (ANSA) - ROME, SEP 30 - Foreign Minister Luigi Di Maio told US Secretary of State Mike Pompeo in Rome Wednesday that Italy was "fully aware" of the need to ensure the security of its 5G networks amid American warnings against using Chinese company Huawei.
The US says Huawei may be a tool for Chinese espionage.
"We are well aware of the concerns of our American allies," Di Maio told Pompeo.
"Italy is fully conscious of (the need) to ensure the security of its 5G networks.
"It remains an absolute priority for us and we are in favour of common European rules.
Di Maio reiterated that its golden power over 5G projects "boosts the government's ability to monitor" the issue.
Pompeo said that in talks with Premier Giuseppe Conte earlier, he had "asked (Italy) to pay attention to the privacy of its citizens" in setting up 5G networks, possibly with Huawei.
Pompeo said "the Chinese Communist Party is trying to exploit its presence in Italy for its own strategic purposes, they aren't here to make sincere partnerships".
The US is also concerned about Italy last year becoming the first G7 member to sign up to China's ambitious Belt and Road ('New Silk Road') trade and infrastructure investment plan, citing fears of key trade secrets ad technologies slipping into Beijing's hands.
Di Maio told the press conference with Pompeo that "the message is clear: Italy is firmly anchored to the US and the EU...a country like ours is open to the possibility of investments, but never outside (NATO)".
Di Maio told Pompeo Italy remained "anchored" to the US and NATO and said "we are counting a lot on US influence".
The foreign minister also thanked the secretary of state for his "attention" to the case of Chico Forti, an Italian businessman serving life for murder in Florida who supporters say is the victim of a miscarriage of justice.
The case is "very dear to the heart" of the Italian government, which will continue to make every effort to see Forti released, Di Maio said. (ANSA).