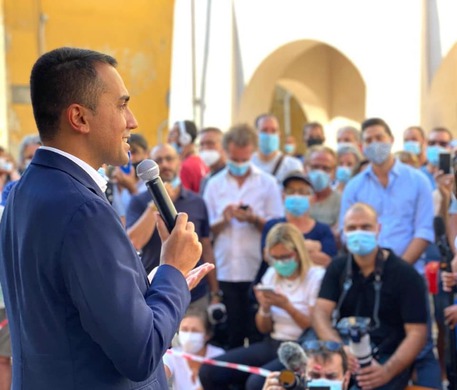 (ANSA) - ROME, SEP 23 - The anti-establishment 5-Star Movement (M5S) is in turmoil after its poor showing in elections in seven regions staged on Sunday and Monday.
On Tuesday influential M5S member Alessandro Di Battista said the movement had an identity crisis after its "worst-ever defeat".
He also complained about "excessive celebration" after the Italian people approved a cut in the number of parliamentarians that the M5S had pushed for in a Constitutional referendum held on the same days as the regional elections.
That comment appeared to be dig at Foreign Minister and fellow M5S bigwig Luigi Di Maio, who hailed the approval of the reform as historic.
On Wednesday another top M5S figure, Lower House Speaker Roberto Fico, responded to Di Battista, pointing out that the movement has traditionally struggled in regional elections, where broad coalitions usually do best.
"It is absolutely not a historic defeat for the movement," Fico said.
"There have been (defeats like this) in the past".
The M5S was only established in 2009 after being spawned by the blog of its founder, comedian Beppe Grillo..
It rapidly gained support on an anti-graft platform, tapping into widespread disaffection with the established parties.
It was the biggest group in parliament after an impressive showing in the 2018 general election.
It entered government after that election, first with the right-wing League and now with centre-left Democratic Party and other smaller groups.
The compromises that come with being in power seemed to have reduced its appeal to some voters.
The M5S is set to hold an 'estates general' soon to map out a way forward. "We have to talk more, organize ourselves better, starting at the local level," said Fico.
"We must hold assemblies, which could be permanent, to find a new identity in a difficult period for the country.
"But in the meantime we move forward with this government and this ruling majority".
Di Maio also called for dialogue on Wednesday, amid speculation the movement could split.
"We have a lot to give the country and everyone's contribution is needed," Di Maio said in a Facebook post. (ANSA).