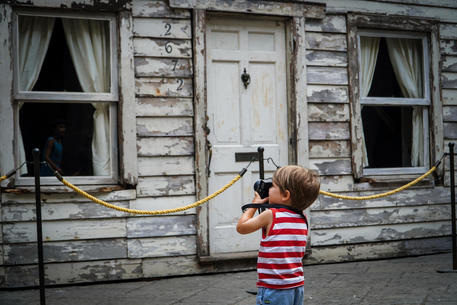 (ANSAmed) - NAPLES, SEPTEMBER 15 - Rosa Parks has found a home at the Royal Palace of Naples, in an installation by American artist Ryan Mendoza titled "Almost Home - The Rosa Parks House Project". Mendoza brought the historic home of the African-American activist to the central courtyard of the historic Palazzo Reale. Parks became an important symbol of the civil rights movement in the US when, in 1955, she refused to give up her seat to a white passenger on a segregated bus in Montgomery, Alabama. The exhibition was organised by the Fondazione Morra Greco with support from the Region of Campania and in collaboration with Campania Museums Regional Management. Rosa Parks' home was originally located in Detroit, Michigan, and was purchased by Parks' niece, Rhea McCauley, to save it from being demolished. McCauley approached Mendoza for help after struggling to find institutional support to restore the home, and in 2016, Mendoza transported the house to his residence in Berlin and rebuilt it in his backyard. "With the 'Almost Home - The Rosa Parks House Project', Ryan Mendoza keeps alive the memory of Rosa Parks and all those who lived in the house during a dramatic and conflicted moment in American history, whose identity, today called into question by the return of the Black Lives Matter movement, appears increasingly fragile and contradictory due to the wounds of a colonial past still open," said the show's curators in a statement. Entrance to the installation is free, and runs through January 6.(ANSAmed). (ANSA).