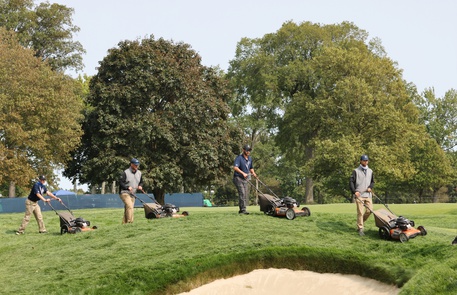 (ANSA) - ROME, SEP 16 - The wait is over and everything is ready for the 120th US Open, the second major of the year.
The competition at Mamaroneck (New York) will see golf's top international names face off from Thursday until Sunday behind closed doors because of the health emergency .
The leadership of the world rankings is up for grabs and it will be another chance for Phil Mickelson to crown his Grand Slam dream.
Tiger Woods will be out to win the tournament for the fourth time, equalling the record of Jack Nicklaus, Ben Hogan, Bobby Jones and Willie Anderson, 12 years after his last triumph.
Victory would see the Californian become the PGA Tour.'s new all-time record holder with 83 victories.
Renato Paratore is the only Italian completing after Francesco Molinari pulled out.
He made his debut in a major at the 2019 US Open thanks to his exploits at the British Masters (European Tour) last July in Newcastle upon Tyne (England).
The 23-year-old Roman has managed to qualify for the big American event again.
"Chicco" Molinari is not the only big golfing name who will be absent.
Brooks Koepka,the winner of the event in 2017 and 2018, is out with knee and hip injuries.
Scottie Scheffler (named best rookie on the PGA Tour 2019-2020) and Sam Horsfield have been forced to pull out for different reasons - they have both tested positive for COVID-19.
They do not have symptoms, they are in isolation and will be replaced by Branden Grace and Rory Sabbatini.
After a truce, the COVID threat has started to spook the American gold circuit again.
After wining the FedEx Cup (and a huge jackpot of 15 million dollars) Dustin Johnson, the world number one, was elected the best player of the PGA Tour 2019-2020.
The American is the hot favourite at the Winged Foot Golf Club - which hosts the event for the sixth time - and he is seeking the second victory of his career at a major after winning the 2016 US Open.
On the other hand, Jon Rahm, the number two in the world ranking, is gunning for his first triumph at a Grand Slam event.
There are also great expectations of Collin Morikawa, American golf's new talent, after he won the PGA Championship Also among the favourites are Justin Thomas, Webb Simpson (triumphant in 2012), Rory McIlroy (the 2011 champion), Bryson DeChambeau and Justin Rose (the 2013 winner).
Woods is seeking to make more history 20 years after his first victory at the US Open.
"Wining becomes increasingly difficult as the years pass," Woods, who turns 45 in December, told a press conference before the tournament.
"You have to make the most of the period of gold and try to beat every record.
"But consistency is fundamental.
"Think about Nadal, Federer, Serena Williams. They have dominated for a long time and that is why they will always be remembered among the best in the history of sport.
"Getting older does not make success easy.
"In addition to all this, Winged Foot is the most difficult course you can play on along with Oakmont (Pennsylvania) and Carnoustie (Scotland)".
Gary Woodland will defend his title.
Mickelson, who threw away victory in 2006 with a collapse that enabled Australia's Geoff Ogilvy to win, is among the challengers too.
The left-hander from San Diego will become the oldest player to lift the trophy at 50 years, three months, if he wins, beating the record of Hale Irwin (who was 45 years and 15 days old when he won in 1990).
Woods will play the first two rounds of the competition alongside Thomas and Morikawa.
McIlroy will be with Adam Scott and Rose. Simpson is with Sergio Garcia and Jason Day.
Mickelson is with Rahm and Paul Casey. Paratore will be flanked by American Richy Werenski and Canadian Taylor Pendrith.
Johnson is with Tony Finau and DeChambeau.
In total 144 players will be in action (including 12 amateurs) and 48 of the world's top 50.
Being as it is not possible for the public to be present, the USGA has put the trophy on display at Mamaroneck so fans can take photos. (ANSA).