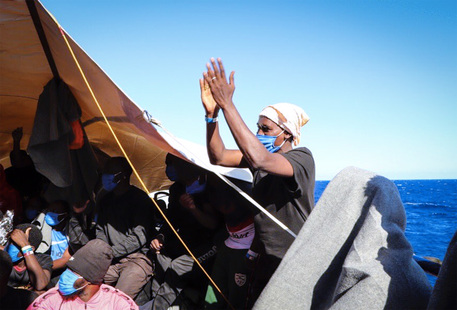 (ANSA) - PALERMO, SEP 1 - Some 353 migrants rescued by the Sea Watch 4 NGO ship will go onto a quarantine ship after they reach Palermo, interior ministry sources said Tuesday.
They will be transhipped onto the 'Gnv Allegra', the third quarantine vessel laid on by the ministry.
The operation will probably take place off Palermo.
Before the op, the Allegra will have to complete prescribed technical and sanitary inspections and take on board medical staff and assistants from the Italian Red Cross.
The transhipment will then take place.
The Sea Watch 4 is expected to reach Palermo in the early hours of Wednesday morning.
Subsequently, the quarantine ship is expected to move to a position off Lampedusa.
Nationalist League party leader Matteo Salvini said "if the Sea watch goes to Palermo we will report the government to the police".
Sicily Governor Nello Musumeci and Lampedusa Mayor Toto' Martello will be received by Premier Giuseppe Conte in Rome on Wednesday, sources said Monday amid a migrant row.
Musumeci's recent closure ordinance for the island's migrant centres amid alleged COVID fears was suspended after a legal appeal by the government.
Martello, for his part, on Monday threatened a general strike on the Sicilian island due to the migrant emergency which has crammed its migrant centre past bursting point.
Lampedusa residents have protested migrant landings.
Martello met with local business owners to decide on the protest Monday.
Also present at the meeting was former League Senator Angela Maraventano.
But the strike was called off pending the talks with Conte.
There are now just over 1,000 migrants at the island's hotspot and its 'Fraternity House' after some 200 were transferred to Sicily.
On Sunday a boat with 21 migrants aboard caught fire off Crotone in Calabria while migrants were being trans-shipped, and at least three died.
British street artist Banksy's rescue ship got into difficulty and had to be helped by an Italian coastguard vessel. (ANSA).