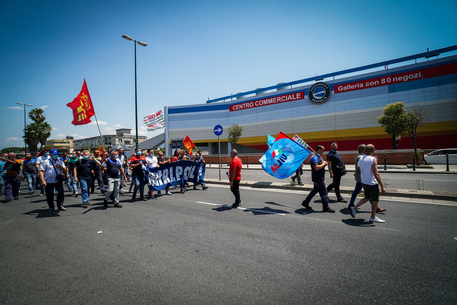 (ANSA) - ROME, 05 AGO - Italy's big three trade union confederations said Wednesday that they will hold a general strike if the government does not extend a ban on businesses firing workers because of the coronavirus emergency until the end of the year.
"If the government failed to extend the moratorium on dismissals until the end of 2020, it would take on the whole responsibility for the risk of a social clash," the heads of CGIL, CISL and UIL, Maurizio Landini, Annamaria Furlan and Pierpaolo Bombardieri, said in a joint statement.
The leaders said they have organized an initiative on September 18 "that can be turned into a general strike.
"It will depend purely on the decisions made by the government and (industry association) Confindustria".
A draft of the government's so-called August decree would extend the ban on dismissing employees, but with several exemptions.
Indeed, as of October 15 the ban of dismissals would not apply to companies that are not using public money to furlough workers.
Firms going bankrupt or being sold would be exempt too. (ANSA).