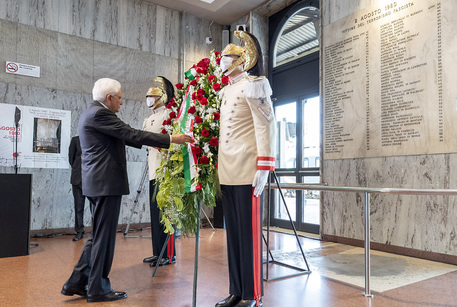 (ANSA) - ROME, 30 LUG - President Sergio Mattarella visited Bologna on Thursday to mark the 40th anniversary of two of the most painful moments in Italy's history - the 1980 Bologna station bombing and the Ustica air crash.
On 27 June 1980, a Bologna-Palermo flight by the now-defunct Itavia airline crashed into the Tyrrhenian Sea between the islands of Ponza and Ustica, killing all 81 people on board.
Known in Italy as the Ustica Massacre ("Strage di Ustica"), the disaster led to numerous investigations, legal actions and accusations, and continues to be a source of controversy, including claims of conspiracy.
The Bologna train station bombing killed 85 people and wounded 200 on August 2, 1980.
Staged by rightwing extremists, it was Italy's worst terrorist attack since World War II.
Mattarella laid a wreath at the commemorative plaque at Bologna station at a ceremony with relatives of the victims and attended a special mass at Bologna's St Peter's Cathedral. "After paying tribute to the plaque that recalls the victims of the barbarism of the bombers, there are few words one can say - pain, memory, truth" the president said. (ANSA).