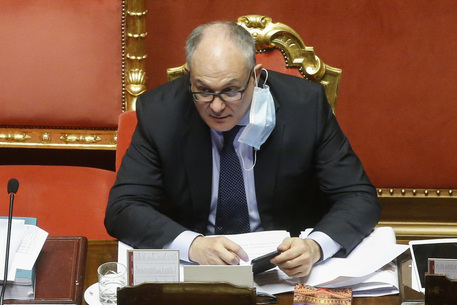 (ANSA) - ROME, 29 LUG - Economy Minister Roberto Gualtieri said Wednesday that the government was seeking to engineer a recovery that lasts as he addressed a debate in the Senate on the national reform plan (PRN) and a further deviation from the previous budget target because of the coronavius emergency.
"The deviation and the PRM represent two dimensions of the effort the government is making to face up to the economic effects of the pandemic and set a line of broader reform actions to render the recovery lasting and sustainable," he said.
He said an "enormous effort" was being made to combat the effects of COVID-19, with the use of measures worth around 100 billion euros, or 6% of GDP.
"Many of the measures stem from dialogue with parliament and with the opposition and local authorities," he said.
He said that Italy's GDP suffered a sharp drop in the second quarter, during the peak of the coronavirus emergency, but forecast that it would rebound by about 15% in the third quarter with respect to the April-June period. (ANSA).