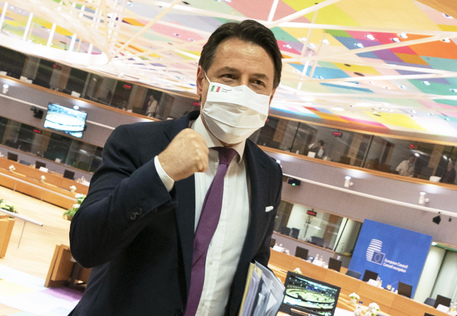 (ANSA) - ROME, 21 LUG - Premier Giuseppe Conte on Tuesday hailed an "historic" EU deal on a post-coronavirus Recovery Fund, reached after the longest summit in the Union's history.
He said the result of the summit, which saw Italy increase its initial allocation of funding, had strengthened the government in Rome.
After five days of acrimonious talks, the EU leaders agreed on a 750 billion euro post-virus stimulus package, consisting of 390 in grants and 360 in loans.
Italy, as worst-hit EU country, will receive the largest single slice of funding, 209 billion, or 28% of the total.
The deal was sealed after bitter debates between 'frugal' northern European states led by the Netherlands, which wanted the percentage of loans increased and tied to structural reforms, and southern European members led by Italy.
Dutch Premier Mark Rutte, who led his country's opposition to the original plan along with Austria, Denmark, Sweden and Finland, obtained an "emergency brake" provision if any member's spending plans deviate from the Fund's purposes.
But thanks largely to Conte's insistence, Rutte did not achieve his goal of imposing veto powers.
Conte was received by President Sergio Mattarella after his success at the summit, which saw Italy's piece of the pie increase from 182 billion to 209.
Conte said "with 209 billion euros, Italy has improved the intervention in its favour compared with the original plan of (European Commission) President (Ursula) von der Leyen," he said.
Conte stressed that the Italian government was now stronger than before the summit.
"The Italian government is stronger: the truth is that the approval of this plan reinforces the action of the government," he said.
Conte added that a task force to draft the necessary reforms is a priority that will be "defined over the coming days".
He said "it must start as soon as possible".
The summit also OK'd a 1.074 trillion seven year EU budget, having overcome the final hurdle, northern countries' insistence on tying funding to Hungary and Poland to their respect for the rule of law. (ANSA).