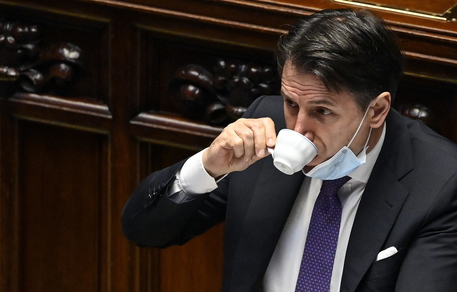 (ANSA) - ROME, JUL 15 - Either the EU wins as a whole or loses as a whole over the proposed coronavirus Recovery Fund, Premier Giuseppe Conte told parliament Wednesday.
"Today in the EU either we all win or we all lose, together", he said amid a row between southern European and northern European countries ahead of this weekend's EU summit on the issue.
Conte said Italy would not accept a "shabby compromise" over the new fund.
Conte told a press conference with German Chancellor Angela Merkel earlier this week on the EU Recovery Fund talks that "it is a very difficult negotiation, I have always stressed the difficulty, but I have tried in an ambitious way to represent the common goal of a solid, strong and coordinated EU response".
Conte said the EU should offer "solutions, not illusions and fears".
Merkel said she thought there might be an agreement after the EU summit on Friday and Saturday even though positions were "in part divergent" at the moment.
She added, however, that another meeting might be needed.
She indicated that she would not back Italy's position to the hilt but would give at least some concessions to the northern hawks.
The European Commission has proposed a 750 billion euro Recovery Fund, more of it coming in grants than loans.
'Frugal' northern European countries want a lower total and more loans, with strings attached such as structural budget reforms, than grants.
Conte has enlisted the support of southern European countries in pushing for the original format, and a deal by the end of this month.
He reiterated this on Wednesday, telling the Italian parliament "we must absolutely reach deal by the end of July".
The countries who are against the format say there is no hurry to get a deal.
Germany is duty chair of the EU.
It is trying to negotiate a deal between the two groups of countries.
European Economic Affairs Commissioner Paolo Gentiloni also said Wednesday that "there cannot be failures or postponements at the summit, we cannot afford it". (ANSA).