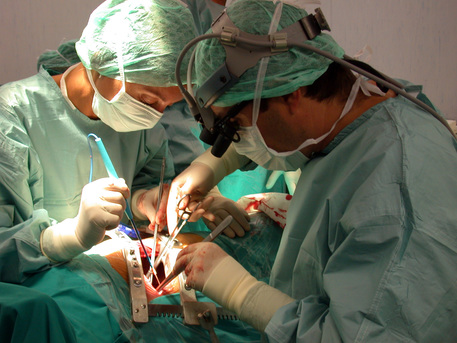 (ANSA) - ROME, JUL 7 - Two female Siamese twins from the Central African Republic joined at the head were separated at Rome's Bambino Gesù children's hospital a month ago, hospital sources said on Tuesday.
It was the first such case in Italy.
The girls were joined since birth from the back of the head, with their cranium and much of their vein system in common, hospital sources said.
After more than a year's preparation, the girls were subjected to three extremely delicate operations and separated on June 5, after an 18-hour operation.
A month on from the op they are doing well said the sources.
The girls, Ervina and Prefina, turned two on June 29 and are in the hospital's neurosurgery ward in two beds near their mother.
Bambino Gesù President Mariella Enoc first saw them in Bangui after their birth in September 2018 and decided to bring them to Rome.
They were joined in a very rare condition, sources said, and have different personalities despite sharing cerebral functions.
The operations succeeded despite a high risk of haemorrhage and ischemia.
They had three ops, the first in May 2019, the second in June 2019, and the third in June 2020, sources said.
"There is still a risk of infection but scans have shown their brains are intact and the recreated system works", they said.
(ANSA).