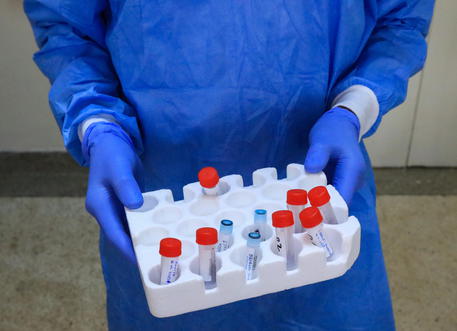 (ANSA) - Rome, April 30 - All the people who recover from COVID-19 develop antibodies, according to a study by Chongqing Medical University published in the Nature Medicine journal.
100% of the Infected Have Antibodies.
The study revealed that 100% of the patients analysed had IgG antibodies, the ones produced during the first infection and which give long-term protection.
This means that serological testing may be helpful for the diagnosis of suspected patients with negative swab results and for the identification of asymptomatic infections.
Good News.
Gianni Rezza, the director of the infective diseases department of Italy's Higher Health Institute (ISS), commented that "the Nature study that confirms the presence of SarsCov2 antibodies is good news.
"Nevertheless, it is not yet known whether these antibodies are protective," he added. Antibodies.
It had not previously been clear whether the response of antibodies to the virus lasted and whether serological testing would be useful.
The study, led by Ai-Long Huang, showed that in all of the 285 patients studied developed specific antibodies for the virus after about 17-19 days of symptom onset.
It said that 94.1% had IgM antibodies (the ones that are activated immediately when the organism comes into contact with an infection, giving short-term protection) 20-22 days after the onset of symptoms. So there was an increase in both types of antibody in the first three weeks after the onset of symptoms, although the IgM showed a slight decrease in the third week.
No association was found between the clinical characteristics of the patients and the different antibody levels. Useful Tests.
The study showed the usefulness of serological testing as a method in a survey on 164 individuals in close contact with COVID-19 positive patients.
Of these people, 16 people were positive for swabs and three of them were asymptomatic, while seven of the 148 people who tested negative had specific antibodies for the virus.
This means that 4.3% of the close contacts were missed by the swabs.
The researchers concluded that swab tests remain useful for a quick confirmation of infection, while antibody tests can be important as a complement for the diagnosis of suspect cases that were negative for the swab and to monitor people who came into contact with the infected but are asymptomatic.