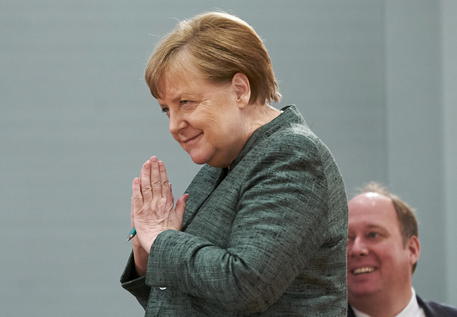 (ANSA) - Berlin, April 9 - German Chancellor Angela Merkel said Thursday she agreed with Premier Giuseppe Conte on the urgent need for solidarity during Europe's "most difficult hour" due to the coronavirus emergency.
"I've spoken to Giuseppe Conte and we agree on the fact that solidarity is needed in Europe with urgency in one of the most difficult moments, if not the most difficult," she said.
"And Germany is ready for solidarity".
Conte is pushing for euro bonds to fund the economic response to the emergency but Merkel said Thursday that the European Stability Mechanism should be used alongside the European Investment Bank and the EU's new SURE unemployment scheme.
The Eurogroup is split between those like Italy, France and Spain who are calling for so-called 'coronabonds' guaranteed for all and northern countries like Germany and the Netherlands who are against mutualizing debt and want the ESM to be used.
Conte told the BBC earlier that the European project risked failing if a common response is not agreed.

But Merkel reiterated Germany's opposition to coronabonds Thursday. "You know that I don't think that we should have a common guarantee of debts and therefore we reject euro bonds," she said. "But there are so many instruments of solidarity that good solutions can be found. She repeated that solidarity was "urgent" but stressed "you can have different assessments on what are the proper measures (to achieve it)". Austria, Finland, Denmark and other northern deficit hawks are also against coronabonds, but Italy, France, Spain and Greece have rejected using the ESM bailout fund saying it is outmoded, as it was envisioned for sovereign-debt crises, and penalizes debtor countries like Italy and Greece.