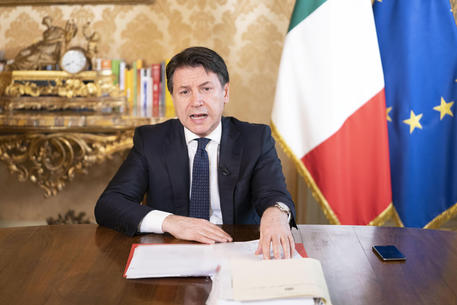 (ANSA) - Rome, April 1 - The Netherlands needs euro bonds just like Italy does to cushion the economic impact of the coronavirus, Premier Giuseppe Conte told Dutch daily De Telegraaf Wednesday.
Italy and Spain are arguing in favour of so-called 'coronabonds' but Germany, Netherlands and Finland have ruled them out saying the European Stability Mechanism (ESM) can be used, an option Italy has rejected.
Conte told De Telegraaf that "Italy is not asking the Dutch citizens to pay for Italian debt. We are not asking for an euro from Dutch taxpayers. Europe must act in a solidarity-based and effective way, because it is unthinkable that some people may benefit from this crisis.
"The European recovery bonds are the best way to respond, also for Dutch citizens. They, too, need guarantees. The recession will hit almost everywhere".
Conte added that the EU response must come immediately "or else the patient will die".
"Extraordinary instruments are needed, but they will be useless if they come too late".
no country should try to exploit the coronavirus crisis to "load past debts onto the shoulders of others," Conte said in an interview to be published by German daily Die Zeit Thursday.

He said this was not his government's aim with its proposal for coronabonds. Conte asked for possible instruments to be weighed "without a priori vetoes". The Italian premier said "we are a union and it is time to demonstrate that". He called for action that was "commensurate to the challenge of the moment."