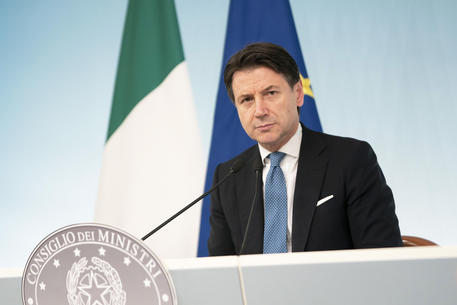 (ANSA) - Rome, March 16 - The cabinet on Monday issued its highly anticipated 'cure Italy' decree to offset the economic impact of the coronavirus epidemic.
Premier Giuseppe Conte said the government had passed a "mighty" 25 billion euro package "activating" 350 billion euros more of measures to ease the economic pain of the coronavirus and was building a "dam to protect businesses, families and workers." "No one should feel abandoned, the State is there for them," he said.
"We can speak of an Italian model not only for the strategies to fight the virus but also of an Italian model for the strategy of economic response", the premier said.
"Let the EU follow us. The first signals are important. Italy is a promoter of a message to all the EU institutions," he told a press conference.
"Italy is in the front line, the EU must follow us," he reiterated.
"We'll have to simplify, innovate and lighten the tax burden," Conte added.
Conte said his fellow country people should be "proud to be Italians".
Economy Minister Roberto Gualtieri said "we have decided to use all the 25 billion of net indebtedness approved by parliament" and said an added three and a half billion euros would go to the national health service and the civil protection department.
He said that 10 billion euros would safeguard jobs and that no one would lose their job.
There would also be help for the freight sector, said Gualtieri.
The Eurogroup later Monday would "adopt our approach", Gualtieri said.
Civil Service Minister Fabiana Dadone said the public administration could "exempt" workers if they are unable to work remotely or take holidays.
She said that 'smart working' would become the routine and that competitive exams for civil service posts would be suspended for two months.
Labour Minister Nunzia Catalfo said there would be three billion euros for the self-employed and professionals "to safeguard the period of inactivity".
There is also an intervention for Alitalia, which would become Treasury-controlled, she said.
Defence Minister Lorenzo Guerini said there would be an "extraordinary" enrolment of doctors and acquisition of material, while 1,000 litres of disinfectant a day were already being produced by a Florence military base.