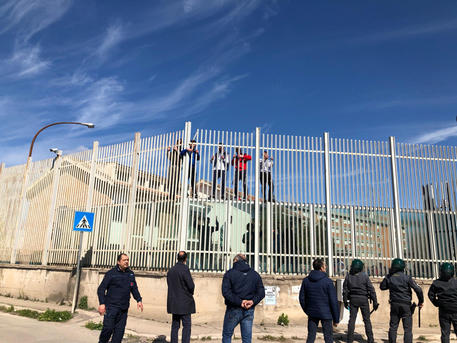 (ANSA) - Rome, March 9 - Seven people died as violent protests broke out Monday in 22 Italian prisons against coronavirus restrictions with many inmates asking for an amnesty due to the virus emergency.
Some 20 inmates managed to break out of Foggia prison in a riot Monday morning, local sources said, while there were fires in Rome's two jails and at a Prato prison too.
In all, 50 inmates got out of the Foggia penitentiary but police succeeded in stopping about 30 of them.
Shop keepers in the area were told to close their shops.

A seventh inmate from Modena jailed died on Monday after the unrest there.
The 40-year-old man is thought to have died of an overdose after the prison pharmacy was raided during the violence, as did most of the other inmates.
One prisoner is though to have died because of smoke inhalation after matrasses were set alight during the protest.
The seventh victim, like three others, passed away after being transferred away from Modena jail.

Serious riots were taking place at San Vittore in Milan and Rebibbia in Rome where, as well as burning mattresses, some inmates attacked the infirmaries.
Cells were also burned in a prison protest against the coronavirus measures in Prato prison.
Smoke started billowing out inside Rome's Regina Coeli Prison on Monday and police officers rushed to the scene.
Several fires were reported at the Italian capital's other jail, Rebibbiba, amid protests against coronavirus measures.
Fire fighters were trying to put out the flames.
A riot is also ongoing at the prison in Foggia, while there has been an attempted break-out at the Ucciardone in Palermo, sources said Monday.
In Foggia, several inmates have managed to get out after tearing up a gate at the block house and are in the road outside, where they have been blocked by police.
Many inmates are scaling the perimeter gates too.
Some prisoners took to the roofs and have started a fire there.
Far to the north in Verona prison, two inmates have died after ingesting psychoactive drugs they stole during a protest over the weekend.
In Milan, at San Vittore, inmates also took to the roofs to protest recent coronavirus restrictions on visits.
The protesters are angry at the restriction of face time with visiting relatives due to the coronavirus.
Jails have been ordered to stop all visits and limit day releases. Rights campaigners warned of mass revolts over the new measures, and families gathered outside prisons to protest the restrictions, and to get news of their loved ones.
The Italian jail system is designed to hold some 51,000 inmates, but has upwards of 61,000, leading to chronic overcrowding.
One of the worst revolts has been in Pavia prison south of Milan.
The inmates devastated the facility on Sunday.
They were persuaded to return to their cells after a long and tough negotiation Sunday night.

There was tension in Naples and Frosinone too.
Italy's national guarantor for persons detained, Mauro Palma, on Monday expressed "strong concern" over the "unacceptable" violence in Italian prisons.
He said this had had "extremely serious consequences, above all the death of some people detained".
Justice Minister Alfonso Bonafede said he would urgently brief parliament on the prison situation on Wednesday in the Senate at five in the afternoon.