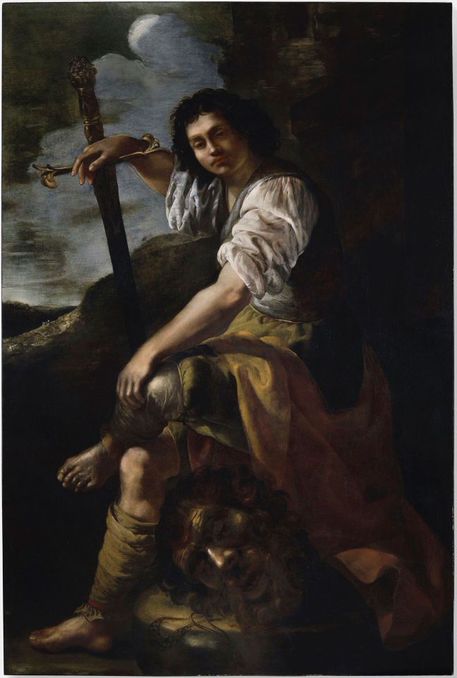 (ANSA) - London, March 3 - A new Artemisia Gentileschi painting has been 'discovered' in London after long being attributed to one of her father's students.
The David and Goliath (1639), hitherto attributed to Giovanni Francesco Guerrieri, has now been recognised as on the official canon of the queen of the Italian Baroque after years of dispute among experts.
Art historian Simon Gillespie found Artemisia's signature on David's sword after a recent restoration of the work.
This summer the National Gallery will host the UK's first monographic show on Gentileschi, from April 4 to July 26.
Long underrated because of an alleged scandal linked to her rape by an older painter, Artemisia is now considered one of the most accomplished seventeenth-century artists working in the dramatic style of Caravaggio.
In an era when women had few opportunities to pursue artistic training or work as professional artists, Artemisia was the first woman to become a member of the Accademia di Arte del Disegno in Florence and had an international clientele.
Artemisia specialized in scenes of female heroines and stories centered on women from myths, allegories, and the Bible, including victims, suicides, and warriors.
Some of her best known subjects are Susanna and the Elders (particularly the 1610 version in Pommersfelden) and Judith Slaying Holofernes (her 1614-1620 version is in the Uffizi gallery) and Judith and Her Maidservant (her version of 1625 at the Detroit Institute of Arts).
Artemisia was known for being able to depict the female figure with great naturalism, and her skill in handling color to express dimension and drama.
The story of her rape by late Mannerist painter Agostino Tassi as a young woman and her participation in the trial of her rapist long overshadowed her achievements as an artist.
For many years, she was regarded as a curiosity. Her life and art have been reexamined by scholars in the 20th century, and she is now regarded as one of the most progressive and expressive painters of her generation.
The Art Newspaper said last week that ahead of the first major UK exhibition of Gentileschi's work, a London conservation studio has unveiled a painting newly attributed to this best-known female artist of the Italian Baroque.
The large oil on canvas depicts David and Goliath, a favourite Biblical subject for both Artemisia (1593-around 1654) and her father, Orazio Gentileschi (1563-1639). When the work was sold at Sotheby's in 1975, it was attributed to Giovanni Francesco Guerrieri (1589-1655), a student of Orazio. However, by the time it resurfaced in 2018 at Hampel Fine Art Auctions in Munich, Artemisia had entered the art historical canon, and the work came under scrutiny from scholars and dealers. It was reattributed at the eleventh hour to Artemisia, selling for €104,000 to a UK-based collector who wishes to remain anonymous.
He engaged the private conservator Simon Gillespie to restore the painting in London-the city in which the work is thought to have been painted in the late 1630s. After periods working in Rome, Florence, Venice and Naples, Artemisia stayed in the English capital in 1639, possibly assisting her elderly father to complete a series of allegorical ceiling paintings for the Queen's House in Greenwich (later moved to Marlborough House).
Gillespie and the Italian scholar Gianni Papi, a Caravaggio and Gentileschi specialist, back the new attribution of David and Goliath to Artemisia in the latest issue of the Burlington Magazine. As long ago as 1996, Papi writes, he thought the painting "seemed characteristic of Gentileschi in its atmosphere and especially in the sinuous figure of David", based on the single black-and-white photograph available at the time.
Now, having studied the work in the conservation studio, Papi says cleaning has revealed an original colour palette consistent with Artemisia's work, for example in the brightened sky and David's golden ochre cloak. Other details that suggest her hand include David's sleeve, the play of light across his face and the barren landscape. Papi identifies the work with an 18th-century account by the art historian and politician Horace Walpole, who wrote: "King Charles [I of England] had several of [Artemisia Gentileschi's] works. Her best was David with the head of Goliath." Gillespie's restoration also uncovered the faint signature "Artemisia" along the blade of David's sword. The inscription includes the digits "16-", presumably the traces of a date that can no longer be read, Gillespie writes in his technical report for the magazine. The discovery is "confirmation of the painting's autograph status", according to Papi.