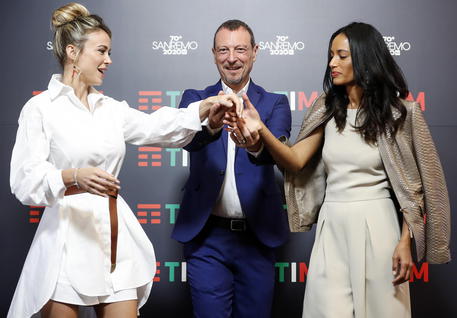 (ANSA) - Rome, February 4 - Italy's much-loved Sanremo Song Festival gets under way on Tuesday night. The week-long festival helped launch the careers of many of Italy's top musicians, such as Domenico Modugno, Eros Ramazzotti and Laura Pausini.
Singer Irene Grandi will kick off the competition on Tuesday.
She is one of the 12 'big name' artists who will debut on Tuesday night, with the remaining 12 performing on Wednesday.
They will each sing twice before the winner is announced on Saturday night.
Unveiling the line-up, host Amadeus said he had put two pre-festival rows behind him. The first was over an allegedly sexist remark he made about motor-racing legend Valentino Rossi's girlfriend, one of the heavily female line up of his assistants at this year's Sanremo song fest. Presenting Francesca Sofia Novello along with another 10 women at the fest he is hosting again, Amadeus praised her for "taking a step backwards" and not trying to share the limelight with her "great man". He was slammed by feminists, many other entertainers and several politicians. The second row was over Amadeus's inclusion of controversial rapper Junior Cally among the contestants. In lyrics from his 2017 song "Strega Lyrics", the Roman rapper, 29, whose real name is Antonio Signore, uses vulgar and sexual language and describes killing a woman.