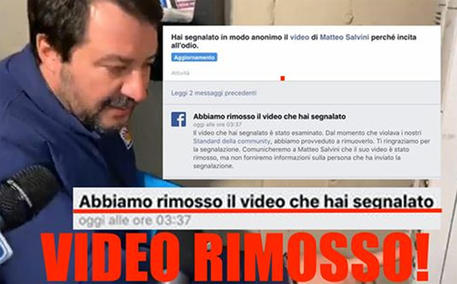 (ANSA) - Bologna, January 28 - Facebook on Tuesday removed a video of rightwing strongman Matteo Salvini ringing a doorbell in an electoral stunt in Bologna and asking if a pusher lived there.
Facebook said it had taken the video down due to a privacy breach.
The video was removed at the request of the victim of the stunt, 17-year-old Tunisian Yassin, whose surname has not been released.
Surrounded by a film crew and a crowd of supporters, nationalist League party leader Salvini rang the bell after a woman who lost her son to drugs told him a pusher lived there.
Yassin has said he is not a pusher and that the woman was irked at him because he and friends let off fireworks outside her house.
The stunt, in the runup to regional elections which the League lost on Sunday, was widely condemned and drew the ire of Tunisia, whose ambassador protested.
Salvini has said he will apologise if the boy turns out not to be a pusher.
Yassin's lawyer, anti-hate speech campaigner Cathy La Torre, announced that the video had been removed from the social network. "Facebook has removed from Matteo Salvini's page the video of shame," she said.
La Torre said she had asked for it to be removed because it allegedly instigated race hatred.
Yassin, who has not been placed under investigation by police, is suing Salvini.
In the Emilia Romagna elections, the League's Lucia Bergonzoni lost by about eight points to the ruling centre-left Democratic Party's (PD) incumbent Governor Stefano Bonaccini.
This was a blow to Salvini's hopes of exploiting a victory in one of the staunchest leftwing strongholds to demand a change of government in Rome.
The PD are in government with the anti-establishment 5-Star Movement (M5S) and two smaller parties.
The Emilia Romagna victory has been seen as a boost for the government despite the M5S vote crumbling and despite a defeat to the centre right in the other regional elections on Sunday, in Calabria.
Salvini, who has said a victory in Emilia has "only been postponed", said he would do everything he did in the electoral campaign again, including another stunt at a PD-run town hit by a fostering scandal, Bibbiano.
In the aftermath of the Emilia Romagna win, former premier Romano Prodi on Tuesday called on the PD to "open up" to other civic forces like the Sardines, a grassroots movement which sprang up in opposition to Salvini's populist and allegedly rabble-rousing anti-migrant rhetoric.